Saints of Our School 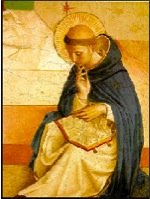 Patron Saint of astronomy and science

He was the son of Blessed Joan of Aza. When she was pregnant, his mother had a vision that a dog leapt from her womb and would set the world on fire with a torch it carried in its mouth. A dog with a torch in its mouth became a symbol for the order that he founded, the Dominicans. At Dominic's baptism, Blessed Joan saw a star shining from his chest, which became another of his symbols in art, and led to his patronage of astronomy.

Dominic was a well-educated man who believed that a strong intellectual base would allow a man to preach more convincingly, and therefore convert more people to the faith. He studied philosophy and theology at the University of Palencia and travelled widely meeting people from all corners of society. He established the Dominican Order in 1215, and chose the motto "to praise, to bless, to preach". A central tenet of the Order was to incorporate intellectual pursuits with the needs of everyday people. He also formed an order of nuns dedicated to the care of young girls.

Legend says that Dominic received a vision of a beggar who, like Dominic, would do great things for the Faith. Dominic met the beggar the next day. He embraced him and said, "You are my companion and must walk with me. If we hold together, no earthly power can withstand us." The beggar was Saint Francis of Assisi.

Dominic received a vision from Our Lady who showed him a wreath of roses, representing the rosary. She told him to say the rosary daily, teach it to all who would listen, and eventually the true faith would win out. Dominic is often credited with the invention of the rosary; it actually pre-dates him, but he certainly spread devotion to it, and used it to strengthen his own spiritual life. The Rosary has for centuries been at the heart of the Dominican Order.

The life of Saint Dominic, his works and death were marked by quiet piety and unceasing devotion to the hard work of spreading the Gospel during a turbulent time.

In the centuries since his death and canonization the Dominican friars have become renowned for their dedication to teaching as well as study of the Holy Scriptures.

The Saints of our Houses

Bernadette lived near Lourdes, in France. Whilst gathering firewood, a beautiful lady appeared to her in a cave. Bernadette saw the lady eighteen times. The lady asked her to scrape the earth. Suddenly a spring started to flow. Bathing in the spring has cured many pilgrims. Later Bernadette became a nun. She died at the age of 36.

Clare was the daughter of a count and countess. After hearing Saint Francis preaching, she decided to give herself to God. After leaving her castle, she met Francis and his brothers at the Altar of Our Lady. Clare cut off her hair and gave her life to Christ. Soon after she started her Order of the Poor Clare's. Her mother, sister and some of the noble ladies joined her. They lived a life of prayer, silence and fasting.

Born in London in 1478, Thomas More studied as a lawyer and later was appointed as High Chancellor of England by King Henry VIII.  As a family man, public servant and writer, he displayed a rare combination of human warmth and Christian wisdom.  When he refused to accept Henry VIII as supreme head of the Church of England and was opposed to the King’s divorce, he was imprisoned in the Tower of London.  After fifteen months imprisonment he was finally charged with treason before being beheaded on 6th July 1535.  He went to his death with unshakable faith, great heroism and profound charity.

John Fisher was an English Roman Catholic Bishop, Cardinal and Martyr. He was executed in the Tower of London by order of King Henry VIII during the English Reformation for refusing to accept him as Head of the Church of England. On June 22, 1535, he was taken from his cell in the Bell Tower and executed for treason. John Fisher was canonized a Saint in 1935. By his example of learning, holiness, faith, loyalty and courage, by his service to God and others, John Fisher's life and death were truly a witness to our faith.